Maybe ignored more often by servicing departments, fair lending is now becoming an issue that deserves at least some attention.

Driven by the CFPB, regulators are starting to pay closer attention to fair lending issues in mortgage servicing departments. Fair lending examinations have previously focused more attention on origination activities, so this will represent somewhat of a shift.

This started with regulators updating their examination manuals*, and is now starting to be seen more regularly as a topic of discussion in examinations.

*See Module 4 of the CFPB’s ECOA examination manual as an example.

But sometimes it’s better to have an actual example than to talk about things hypothetically. So let’s do just that. Note: I’m including collections in loan servicing for this newsletter although I know many institutions treat them as distinct departments.

Bank ABC has a servicing department of 14 people. Of those, 3 will handle hardship applications. These 3 people understand the sensitivity of their position – they often deal with people at a terrible, stressful point in their lives. The reason for the setback varies: sometimes it’s a medical condition, other times terminated employment. In any case, the end result is the same – they can’t afford their current mortgage payments and are worried their children will be homeless. (Maybe I’m being a bit dramatic – but better than reading a textbook, right?). Sometimes borrowers will proactively call requesting assistance. Other times they avoid the Bank at all costs, forcing the Bank to leave dozens of messages on their answering machines.

In 2014 the Bank originates $500 million in residential mortgages, all of which the Bank services. By 2017, several borrowers are starting to have trouble making their payment. One borrower is a white male named Jim. He had a 30-year fixed rate loan of $250,000 (80% LTV) at 4.25% and had above average credit scores. Separately, a consumer named Linda is also struggling with her mortgage payments. She is a minority female with the same credit profile and loan terms as Jim.

Jim suffered a heart attack in 2017. He would recover fully but medical expenses and time off of work caused an economic hardship. Before he missed any mortgage payments, however, he called Bank ABC asking for help. One of the 3 hardship experts took the call. After speaking with Jim, he believed Jim would be able to afford his mortgage payments after a temporary lapse. So he exercised his discretion and offered to hold Jim’s mortgage payments for 3 months. After that period, normal payments would resume. The missed payments would simply be added on to the end of the loan, extending the maturity date by 3 months.

Linda didn’t call ahead. She was not optimistic about the Bank’s ability to help with her situation. She had been laid off from her job as a special education teacher and the bills were piling up. Irrational, she knew, but she let the letters from the Bank’s servicing department pile up (letters from a different hardship specialist). One month, two months, three months. At that point, she had found a new job. But the damage was done – she owed late payments, her credit was destroyed, the Bank was demanding full payment of amounts past due.

Two years later, an FDIC regulator came in to the Bank to conduct a fair lending review, focused in on the servicing department. It wasn’t long before he found something that caught his eye – two loans, borrowers Jim and Linda.

Analyze this from a fair lending standpoint:

Jim and Linda are what we call “similarly-situated” consumers. Yet they received different solutions to their shared problem – one received assistance and kept his home, and the other racked up late charges, ruined her finances, and almost lost her home.

Because I can tell you that, from the perspective of a suspicious regulator, it will look that this can be explained by the differences in Jim and Linda’s gender and race. And there you see the fair lending concern.

You probably want to say that the difference was not based on gender or race- but rather because of Jim’s pro-activeness and cooperative nature. The Bank’s hardship specialist exercised his discretion to approve the loss mitigation to him.

But you know that discretion is a dirty word in the fair lending world. And you’ll have to ask yourself how easy it will be to prove that there was a legitimate difference between these two cases? It’s not like there are logs of how “cooperative” a consumer is, right?

What could the Bank have done differently? The goals here will be to increase consistency and create specific documentation that will protect against any fair lending concerns. In the example of Bank ABC’s Jim/Linda situation, some things that would have helped are as follows:

It’s hard for a group to operate at a high-level without a comfortable level of trust between key members. If you’re wondering whether your teammates trust you (or vice versa), here are some questions to ask:

“Quality in a product or service is not what the supplier puts in. It is what the customer gets out and is willing to pay for. A product is not quality beacuse it is hard to make and costs a lot of money, as manufacturers typically believe. This is incompetence. Customers pay only for what is of use to them and gives them value.”  -Peter Drucker 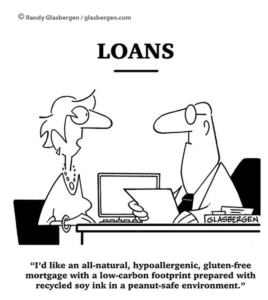 Thanks so much for reading our weekly newsletters. We’re not always going to be perfect, but because we always do our best and try not to overpromise, we hope that we’re always going to be trustworthy. Your calls and e-mails are very helpful – please keep contributing.

**These are our opinions. We’re not authorized, or willing, to express those of others.**