Washington Trust was founded in 1800, just 24 years after the colonists declared independence and a mere nine years following the establishment of the country’s first national bank in Philadelphia.

Today, Washington Trust is the oldest community bank in the nation, the largest state-chartered bank headquartered in Rhode Island, and one of the Northeast’s premier financial services companies – offering a comprehensive range of financial services, including commercial banking, mortgage banking, personal banking, and wealth management and trust services through offices located in Rhode Island, Connecticut, and Massachusetts.

The bank was the first bank to print George Washington’s likeness on currency — 69 years before President Washington appeared on the federally issued one-dollar bill and 132 years before the Washington quarter appeared. 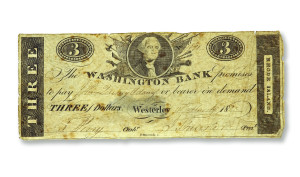 In 2015, Washington Trust was recognized by Forbes as one of “America’s 50 Most Trustworthy Financial Companies,” and has been named one of the “Best Places To Work” in Rhode Island by Providence Business News for six consecutive years.

In 2016, Washington Trust’s  Mortgage Division had its best year in their long history by providing $870 million in residential mortgage financing.